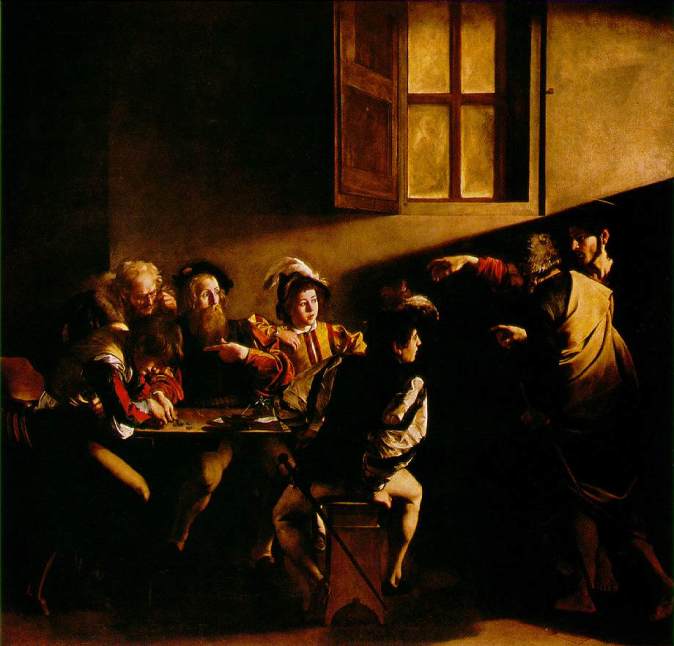 “And when Jesus passed on from thence, He saw a man sitting in the custom-house, named Matthew; and He saith to him: follow me. And he arose up and followed Him.”

A brief event. A single bible verse. 32 words. Yet this event – in the fleeting moments it transpired – revolutionized one man’s life. And though one might not even pause to reflect on this verse (being tempted to advance eagerly to the Beatitudes, the healing of the blind or leprous, and other great acts and expositions of Christ), one man did pause and immortalize this encounter in his brilliant, powerful yet subdued rendition known as ‘The Calling of St. Matthew’. That man was Michelangelo de Merisi – better known as Caravaggio.

In her wonderful and concise work, Caravaggio – Painter of Miracles, Francine Prose introduces us to an artist who could seem both blessed and bedevilled. While one might smirk wryly and consider this the lot of most artists, there was something different about Caravaggio. As a teenager, Caravaggio would lose both parents, be apprenticed to and chafe under a former student of Titian, and subsequently run with a dangerous crowd that led him from wealth to squalor, fame to infamy, and security to terror. He would find himself commissioned by influential cardinals, priestly orders, and wealthy benefactors. And then he would find himself charged with libel, theft, and murder. Caravaggio would be granted the coveted title ‘Knight of Malta’, and then branded as a fugitive murderer. His tumultuous, erratic life would end feverishly eluding his vengeful pursuers and ultimately dying alone on a dirty seashore. He was thirty-eight.

Caravaggio has been hailed by many art scholars as having defied the Mannerist (idealized) conventions of his day, and helped usher in a Baroque style with naturalist influence on the likes of Rembrandt, Bernini, and Rubens. He would paint fruit baskets with bruises and mealy qualities. He would use gypsies and prostitutes as models for holy women – with no sacrilege intended, but rather to portray humanity intertwined with holiness. As Ms. Prose would write:

“For Caravaggio, the lives of saints and martyrs and their dramas of suffering and redemption were played out among real men and women, on earth, in the here and now, and in almost total darkness.”

“It was suggested to [Caravaggio] that a figurative painter should seek inspiration in the idealized and pleasing proportions of classical sculpture, and…Caravaggio replied that he would rather find his models among the Gypsy women in the street.”

His subjects, far from the antiseptic and idealized, resonate with us to our gritty core. The emotional joy and burden of the human experience is at the front and center of each of his works. We are asked to feel the bone-deep ache and earthy discomfort of Joseph and Mary’s flight to Egypt. We are drawn in despair to the inconsolable grief of the faithful at the moment of Christ’s entombment. And we share in the dignity and terror of Peter during his inverted crucifixion.

It is this that is most awe-inspiring about Caravaggio. He had an uncanny ability to mesmerize, to entrance, to utterly raise the hair on your neck or put a lump in your throat with his very human moments. As Ms. Prose would say,

“Everything is…calculated to work its magic on the viewer, to make us feel that a miracle is transpiring in front of our eyes, that it is happening to people like us, that we can touch and feel and smell it.”

“What Caravaggio seems to have learned…is the central importance of the human drama, of a psychological moment, and the way in which an event can be intensified by individualizing, rather than generalizing the players who enact it. The generic saints…have been replaced by a specific man, a recognizable portrait from nature, from life, a human being whose wonder and understandable concern affect us more than we could have been moved by a figure who looks like a saint in a painting – which is to say, like no one we know.”

“Instinctively, Caravaggio understood that the key was to stop struggling against the interiority, the muteness and timelessness of the event, and to take on the challenge of picturing a moment when time and motion have ceased and everything has gone silent.”

That Caravaggio, of all people, who continued to live his life in a boiling cauldron of violent acts and emotions, could somehow distill an event into an image of such utter clarity and poignancy is astounding. Perhaps like Christ’s unexpected, unearned, and unheralded calling of Matthew the despised tax collector, Caravaggio’s artistic gift emerging from his chaotic life can have only one explanation: God’s grace.

Father, Husband, Physician, Amateur Historian, & Catholic convert passionate about the interplay of history, theology, philosophy, & politics. I hope my efforts to refine the lens through which I approach life can help others as they refine theirs...
View all posts by todworner →
This entry was posted in Pantheon. Bookmark the permalink.